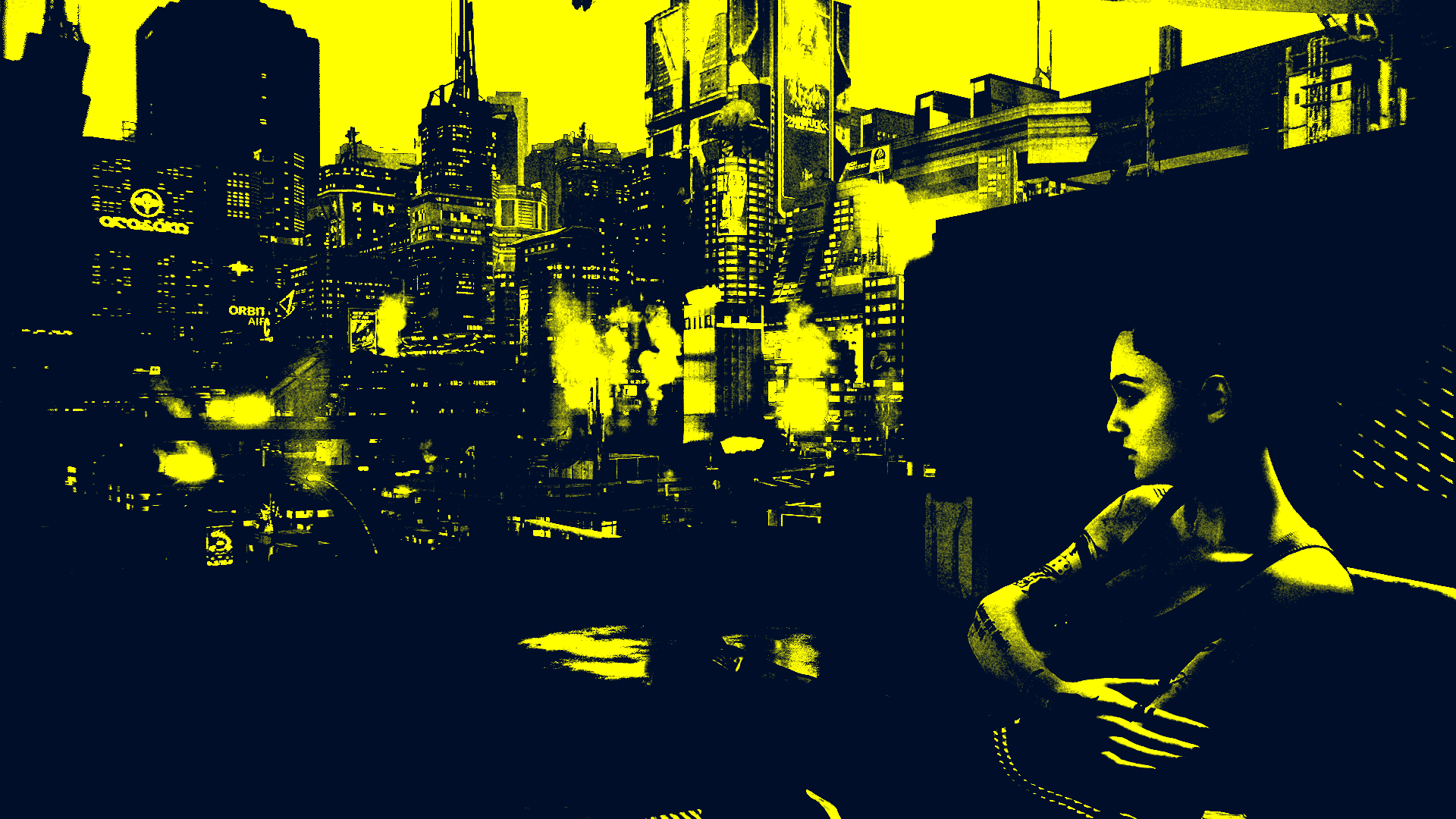 This article discusses plot points from the entirety of Cyberpunk 2077.

V, the protagonist of Cyberpunk 2077, wakes up in a garbage dump after having been shot in the head. He’s+ been betrayed by a contract fixer who arranges criminal work for the tenacious underclasses of the dystopian Night City, watched his best friend die in front of him, and found himself unwittingly caught up in a corporate conspiracy. All around him is debris—sheets of corrugated metal, rusted out car parts, and various other industrial junk—but his semi-mechanical body has been saved from the scrap heap to live on a while longer. His heart still drums a steady pulse. He is stubbornly alive; stubbornly human, despite the inhumanity of the gross refuse that surrounds him.

Throughout the dozens of hours players will spend guiding V through the gleaming, polished-glass skyscrapers and the shadowy, garbage-strewn alleyways of Night City, Cyberpunk establishes its near future world as an immensely terrible place. Corporate interests have triumphed, and their reign has predictably beaten all but the CEOs and their board members down into a state of proto-human desperation. The natural world exists only in sunbaked desert plains where unpredictable dust storms arrive like giant tidal waves to choke the breath from living things or in fetid pools of swampy water gathered in sickly shallows beneath the industrial canopy of flaming oil well towers, venting thick black pollution into the sky. The City’s people mutter curses when bumped into, sneer at passersby, and run screaming from the rattle of automatic weapons as the gangs that have formed ad-hoc local governments launch into sporadic gunfights. Billboards advertise entertainment and food through neon silhouettes, or cartoon illustrations of disembodied asses, bulging penises, and steely ab muscles. Everything about it is, on the surface, devoid of warmth or feeling.

Night City is a deeply unpleasant place, and its oppressive cruelty is what motivates the similarly unpleasant mercenary V to try to improve his lot within its ruins by fucking over others with violent displays of impressive cunning, in pursuit of the only salvation his society seems to offer: getting to sit, finally, at the top of that trash heap. Cyberpunk’s depiction of an America plunged into the abyss of the high-tech social Darwinism its dominant politics have long been heading toward is appropriately miserable. It gives context to the viciousness characters like V are capable of, couching the indifference toward moral good he displays so often in the fact that he’s learned that his world punishes altruism.

And yet, Cyberpunk 2077 isn’t entirely nihilistic. In its opening hours, the game seems content to wallow in resignation—to use its grim world as a vessel for nothing more than campy exploitation-flick one-liners, bloody shoot-outs, and gratuitous sex. The world looks slick enough, in a raindrops-sizzling-on-neon-signs kind of way, that its depressing aesthetic appears to have been adopted not as a way to examine how humanity survives in such a nightmare future, but to use it as a backdrop for ‘80s retrofuturist action drama. But, just as V returns to life in a garbage dump, forced suddenly to confront the worth of his life after it was nearly taken away from him, there’s a beating heart just underneath the top layer of trash that most immediately characterizes the game.

Once V has been resurrected, he learns that he will soon cease to exist. The heist that left him shot in the head, designed to lift an experimental biochip implant called Relic from the Arasaka Corporation, has left him with the personality construct of dead rock star slash revolutionary terrorist Johnny Silverhand (played by an unbelievably assholish, against-type Keanu Reeves) embedded within his brain. Johnny’s personality, V learns, will soon override his own through a process of persistent mind-deterioration. In short, V returns from the dead to find himself terminally ill, with the digital ghost of a celebrity revolutionary accompanying his every move. This revelation encourages, as you might expect, a change in perspective for V. It isn’t apparent right away, but he begins to view others as more than tools or obstacles—to see, whether because of Johnny’s rebellious influence or not, that the best thing he can do in the horrible world he lives in is to recognize the humanity of others.

Soon after this point, V follows the trail of a disappeared colleague to a high-tech brothel called Clouds. Already, the gore splatter and juvenile sexuality of the game has primed the player to expect the meeting with a Clouds sex worker to be as crass and uncomfortably exploitative as the bulk of the game so far. Instead, V is met with a woman or man who speaks poetically to him—of our fleeting lives, of what we do with the short period of mortality given to us by birth. She or he whispers each line, V choosing whether or not to gently touch their wrist as if in confirmation that this is another living person next to him, breathing the same air as him before V's consciousness will evaptorate. It’s a remarkably delicate scene, and one that feels like it’s pulled from a different, more humanistic work entirely.

But moments like these end up recurring, ultimately forming the buttress for a conclusion that sees V’s ultimate fate—altered in its specifics by player choices—as a way for the story to explore not so much science fiction tech theorizing as much as how we choose to live our brief lives in a world that seems unconcerned with the fact that we exist, think, or feel at all. Ironically, the ticking clock counting down V’s remaining life inspires in him (and Cyberpunk’s story) a concern with survival that moves beyond the need for the literal, material subsistence that inspired the inciting criminal heist and into an examination of what the purpose of existence is.

The first hints of this show up subtly, earlier on. “The greatest crimes issue from a desire for excess and not from necessity,” the netrunner T-Bug says right before the Arasaka heist. She speaks this line as they approach a corporation responsible for grinding Night City’s population down into the desperate state V embodies at this point. She’s also quoting Aristotle, drawing a lesson from the distant past to the near future, boiling away the chronology of a tomorrow filled with imposing megacorporation skyscrapers that create species-transforming technology so that only their eternal essence—greedy opportunism—remains.

Johnny Silverhand puts it more simply when explaining his hatred for corporations like Arasaka later on. “This war’s a people’s war against a system that’s spiraled outta our control,” he says. “It’s a war against the fuckin’ forces of entropy.”

The alternative to the human “desire for excess”—to the “forces of entropy”—that have dominated Cyberpunk’s future is shown primarily in the connections V makes with people he previously saw as little more than co-conspirators. If the player doesn’t rush toward the end credits, the bulk of the story is devoted to working with characters like Judy, who seeks to overthrow the monsters controlling Night City’s sex workers, and Panam, a member of one of the desert communities trying to understand how best to live within nominally independent collectives still beholden to corporate influence. In scenes viewed from Johnny Silverhand’s perspective, we see the character treat friends and partners with grotesque cruelty. With the benefit of his spectral hindsight, he asks V to let him possess his body in order to right old wrongs, repairing relationships that ++ he damaged through his heartlessness across a number of side stories. At a few crucial moments in the story, V sees a cat somehow alive despite the destruction of Night City’s wildlife, a reminder that life persists despite every reason not to. In each of these stories (and through its recurring cat), Cyberpunk makes clear that it can only conceive of hope within its dystopia as the recognition of common humanity—of selfless empathy leading to the improvement of material conditions on a small scale, within a decidedly unempathetic society. “We shouldn’t fear change itself, but only who we might change into,” a character says while reading tarot just before one of the game’s endings. She might as well be referring to the apocalyptic techno-futurism of the cyberpunk genre itself, reminding the audience that even amidst the most desperate of circumstances, we don’t have to internalize the callousness of the external world.

The problem with this is that Cyberpunk 2077, for all its thematic concern with the redemptory nature of altruism and insistence on gallows-chaffed humanism, is unable to apply a universal humanity to its own characters. Even apart from the extratextual knowledge of the game’s creation as the result of a gruelling work schedule and it’s regularly grotesque marketing tactics, the level of depth given to its characters is unequally distributed. Its Japanese characters are portrayed largely as stoic economic colonists, many of its Black and Latinx characters as stereotypical Others, sentences punctuated with just enough French Creole and often awkwardly inserted Spanish loan words to render them as distinctly foreign from its white cast. Its women, too, are as likely to be depicted as objectified set dressing as they are developed characters+++. The cyberpunk genre’s founding works are rooted in a cultural fear of East Asia’s growing post-war influence, but Cyberpunk 2077 entrenches rather than rethinks this kind of exclusionary viewpoint. As a result, it undermines its greatest strengths as a work, equivocating on its belief that a recognition of a universal humanity can save us by granting that humanity to its characters unequally.

This is a shame because the game’s implicit prejudices so badly weaken an otherwise potent humanism that’s more than welcome as the antidote to the horrors of Night City. In at least one ending of the game, for example, V enters the abyss of cyberspace and is guided toward a beam of light—a light of obliteration, salvation, or perhaps both—as an AI recites verses from T.S. Eliot’s The Love Song of J. Alfred Prufrock. In quoting from the poem, Cyberpunk positions V as a 21st century wanderer, adrift in an existential confusion and frustrated disillusionment as powerful as anything experienced by the society that gave us the modernists. No matter what choices lead him through this moment of digital identity crisis, Cyberpunk presents a humble answer to the nebulous questions posed by the cultural terror that’s chilled those desperate to find a locus of meaning in a nonsensical world, from Eliot more than a century ago all the way down to the current day. It posits the simple recognition of our fellow humans as fully formed people, as other beings too complex to view through the utilitarian lens of business opportunities, as the only immutable truth that will see us through the inhumanity of modern (or future) life. If only Cyberpunk was able to consistently put this outlook into practice, it would offer an essential message for its players.

+ Cyberpunk lets players customize their own version of V, but, since the character I created was male, they’re referred to as “he” throughout.

++ Johnny’s depiction as a callous, self-absorbed asshole, unempathetic to the people he knows but filled with a violent rage toward the corporations he blames for behaving without compassion, lends the story an unfortunate, bets-hedging bent that equates the indifferent evils of business with the moral failings of the revolutionary.

+++ The exceptions to these one-note portrayals, like the well-written Judy, Panam, or River, are welcome, but end up serving as a warning of how incoherent large-team artistic works can become if not tightly directed than they do as indicators of an overall lack of prejudice.

Reid McCarter is a writer and a co-editor of Bullet Points Monthly. His work has appeared at The AV Club, GQ, Kill Screen, Playboy, The Washington Post, Paste, and VICE. He is also co-editor of SHOOTER and Okay, Hero, co-hosts the Bullet Points podcast, and tweets @reidmccarter.