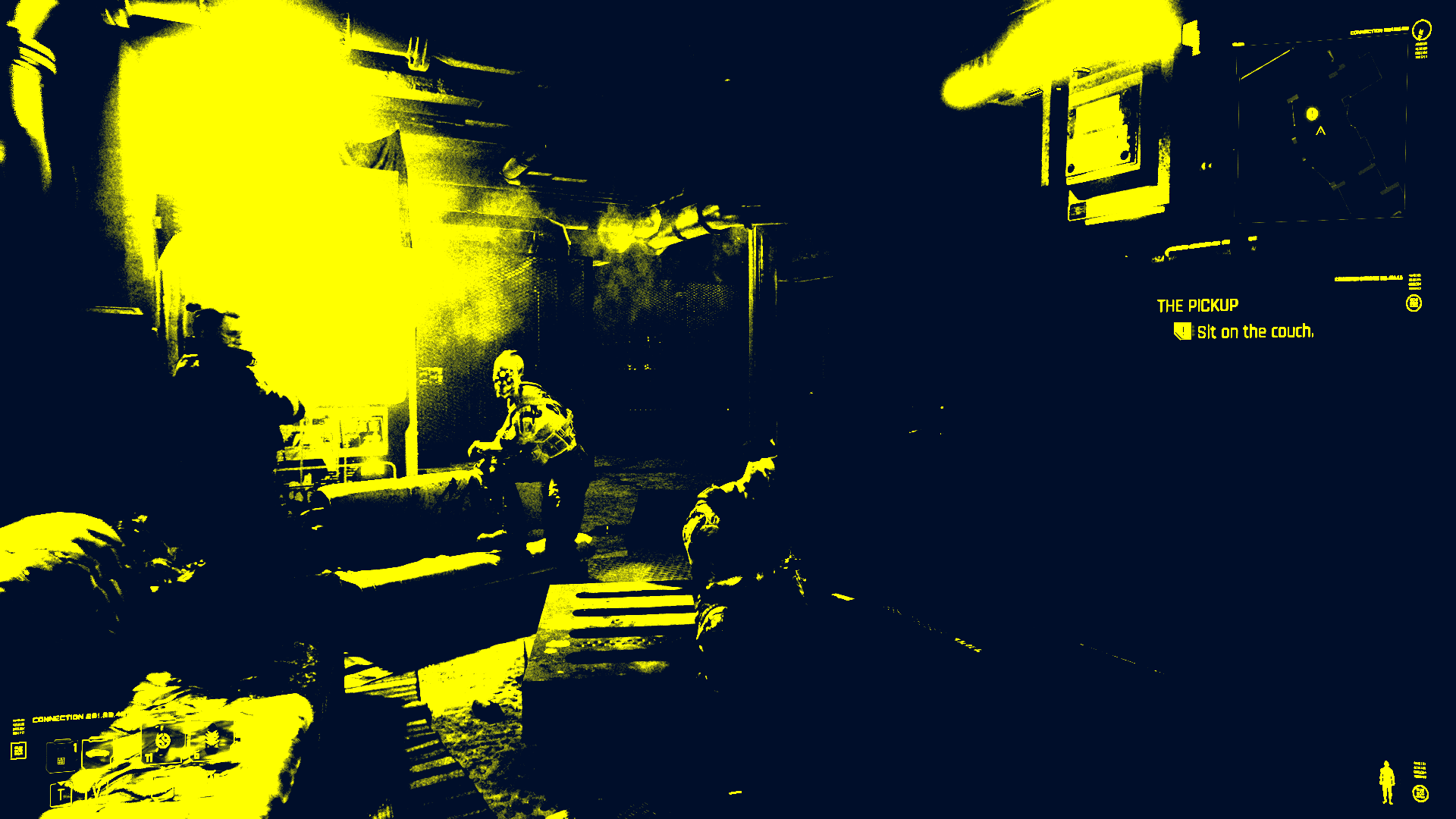 Some 20 or so hours into Cyberpunk 2077 I receive a job alert from an unknown client. l make my way to the designated meeting point—a room in the seedy No-tell Motel. Inside, facing the far window, stands a woman plated all in chrome. After an opening dialogue exchange, my character V recognises her. “Fuck me. It’s you,” V says. “It’s me. Lizzy Wizzy,” the woman confirms. “Who?” I wonder.

Lizzy Wizzy is a major celebrity in 2077’s America. A singer (voiced by real-life musician Grimes), film star, and performance artist, whose mere presence in Night City is big news. I know this because I later caught a mention of her on an in-game radio channel, and found a report about her buried in one of the many informational "data shards" I’d collected. And because I Googled it.

When you have to go digging to learn that someone’s really famous, what does that say? Perhaps I missed something. Perhaps I’m not very observant. But should that matter? Shouldn’t Lizzy’s presence in this world be inescapably loud and ubiquitous?

Night City is intensely visual, its towering mega-buildings stacked with searing neon, mesmerising holograms, and bullying billboards. You’d think Lizzy’s iconic metal image would be pasted and projected all over town like a blazing rash. When I found her in that cheap motel, her legend should have been impressed on my consciousness, triggering a genuine star strike. I should have said “Fuck me. It’s you,” in unison with V.

Cyberpunk as a genre thrives on clashes of contrast, and 2077 creator CD Projekt Red's RPG stays loyal to its dichotomies, from textbook juxtapositions of grubby streets and pristine penthouses to a bespoke central plotline about identity crisis. But crisis also seeps into the machinery beneath—2077 misfires with technical hitches, unrefined systems, and muddled messaging. Its soapy grasp of celebrity and consumerism is one of the ways its fiction pulls itself apart.

It’s not just Lizzy. Night City’s timbre is too quiet, understated. Bassy bars and clubs are immaculately designed, as if by anarchist feng shui masters. But amid polite drinkers and socially-distanced dancers there’s little thrill or tension. Outside, commodified fun is sparse. Ads for action movies splashed on posters. TV screens relaying the news. Radio stations cycling through playlists, listlessly.

At least there’s plenty to read. Those scattered shards are loaded with stories of lifestyle and entertainment possibilities you don’t see. And somehow that’s worse. All the city’s energy, spectacle, and scandal parcelled into walls of uniform text. As I chat with Lizzy she laments that her every public move becomes fodder for the city’s tabloid "screamsheets." But I don’t see those, only more shards and their screenfuls of monochrome. Where is the scream?

As for style and fashion, people dress like it matters, but I don’t believe it. Pedestrians trundle by in outlandish outfits without the matching attitude. Non-playable characters (NPCs) have distinct personal styles but talk and act like they haven’t thought about their look in years. My V makes do with hotchpotch costumes assembled from enemy item drops and small, utilitarian stores. Punk is supposed to be about customising, but I can’t even change my hairstyle.

Perhaps the residents of Night City really don’t care. Is that the point? V’s initial partner in crime Jackie cares, but his grim fate is sealed the moment he starts talking about living the good life. From there, only Johnny Silverhand, the hard-drinking, fast-driving, loud-playing rocker still shows true thirst for enjoyment, and he’s a 50-year dead ghost, out of his time. Perhaps in the years since his prime, all the spirit has drained from the city.

If that were so, 2077 would need to show more interest in the politics and economics of its world. If excessive consumption has lost its lustre for the majority, how does the luxury demand of the tiny "Corpo" class exorcise the spectre of capitalist overproduction? Doesn’t consumerism need to fuel mass dreams of social mobility in order to stave off rebellion? 2077 can’t entertain thoughts of collapse or revolt—unbreakable power is key to its dystopian fetish.

Pessimism is a hallmark of classic cyberpunk, but it has to convince, has to figure the pull and push of consumerism into its narrative. William Gibson’s Burning Chrome touches on the dangling carrot of fame that motivates designer body modification. Neal Stephenson’s Snowcrash balances the collision of street and corporate life on an unseen, commodity-hungry suburbia.

2077’s thinking never meshes together with similar coherence. It has excursions, like the mission that forces you together with ruthless TV executives producing a sensationalist "brain dance" recording of a would-be messiah's crucifixion. But it doesn’t feel like such phenomena are really out there, affecting people’s views and social lives.

You could put these issues down to over ambition, diluted focus, and the overworked rush of inducing the game’s birth before it had reached full term. How many of those data shards describe planned features, hastily repurposed from a bloated design document? Except, 2077 does find time and space to make noise about one particular area of consumerism—the sex industry—and that makes its inattention elsewhere more conspicuous.

Scan the billboards of Night City and you’ll see ads for everyday products, from guns and cars to dentistry aids and "real water." But you’ll mainly see sex, whether as a product itself or a frame to sell other wares. In particular, for some reason, beverages of all kinds are fated to association with erect penises and ejaculate. One banner audibly moans with exaggerated female ecstasy. And the less said about the grim displays for TV’s Watson Whore the better.

Is this satirical? Because “sex sells,” and so naturally would be at the forefront of a commercialized hi-tech dystopia? Sure, fine. It’s a valid observation, if not especially perceptive. But why the fixation? If we’re heading in that direction, what else sells? Beauty, humour, security, family, fame, class. All the things that are so muted in Night City.

2077’s doll technology, which sees individuals temporarily concede control of their bodies to AI, and brain dances, where the user relives another person’s recorded experience, imply all kinds of applications beyond the sexual. How about brain dance videogames? You’ll have to read about them. Physically, games exist in Night City only as set dressing—dusty ‘80s arcade cabinets loitering in the corners of bars, satirising nothing.

Even the monumental consumerist potentials of cybernetic modification feel less embedded in the fabric of the city than sex consumerism is. Some ethical questions are asked in V’s fusion with Johnny and side stories like the Lizzy Wizzy episode and your hunt for "cyberpsychos." More excursions. Where’s the everyday effect of this stuff, on work, leisure and relationships?

Why is selling sex so dominant that it renders other forms of entertainment and desire in Night City invisible? The imbalanced milieu of 2077 leaves this question hanging.

Perhaps because the answer is unflattering. It’s been said before about cyberpunk, but bears repeating—its dystopias are often a kind of cover story for something else, for hyper-masculine fantasies. Under the veil of eternal pessimism, cyberpunk fictions are members-only utopias which celebrate the erasure of every aspect of the feminine (and the queer), except where it fits a twisted notion of sexual "liberation."

2077 is to a great extent just such a heterosexual male consumerist fantasy. There’s no woman to tell you what to do. No kids to provide for. No boss. No rent. You spend the day driving, punching, shooting and fucking, earning pure disposable income to do it again better tomorrow.

No consumer capitalism could afford to be so inflexible and exclusive. It needs everybody’s money. Yet here we are. The billboards act as Rorschach tests that greet visitors as they arrive—do you see pleasure or exploitation, feel excitement or repulsion? If the latter, there’s nothing for you here. How does such one-dimensional consumerism succeed?

It would need everyone in Night City to be a toxically-masculinised sociopathic pleasure seeker. But they aren’t. This isn’t Grand Theft Auto V, where most people you meet are far gone down rabbit holes of tacky material aspiration. The NPCs you get to know in 2077 display no symptoms of influence from the surrounding pornscape. Many have very healthy, adult attitudes to sex and sexual identity, apparently living free from judgment, debasement, and objectification+. They seek lasting connections and community. They’d make terrible consumers.

No patches and bug-fixes will resolve this clash in 2077’s cyborg brain. It features some of the most sensitively written, drawn, animated and voiced NPCs in any RPG++, and combines its artistry with a first-person perspective to produce moments of great intimacy. But these people don’t seem like they live on the same Night City streets I’ve walked. They’re victims of a general malaise, not the specific sexualised oppression that routinely invades my perception.

The aggressive hyper-sexualisation isn’t pointing inwards, then, texturing its people. It’s externalised, pointing out of the screen. Not for their eyes, for ours. Or rather, predictably, the eyes of a favoured straight, male player demographic. Forensically honed in on a single audience to the exclusion of all others, 2077 isn’t depicting a consumerist nightmare, it’s part of one.

+ With exceptions such as Evelyn, caught up in the corruption and depravity of the sex industry.

++ Sadly less true in some cases, notably racially coded characters, such as the Japanese Corpos and Haitian Voodoo Boys, stuck playing the roles of alien outsiders.

Jon Bailes is a social theorist and freelance games critic, originally from the UK. He’s the author of Ideology and the Virtual City: Video Games, Power Fantasies and Neoliberalism (Zero, 2019), and Consciousness and the Neoliberal Subject (Routledge, 2020). He co-runs stateofnatureblog.com and can be found on Twitter @jonbailes3.