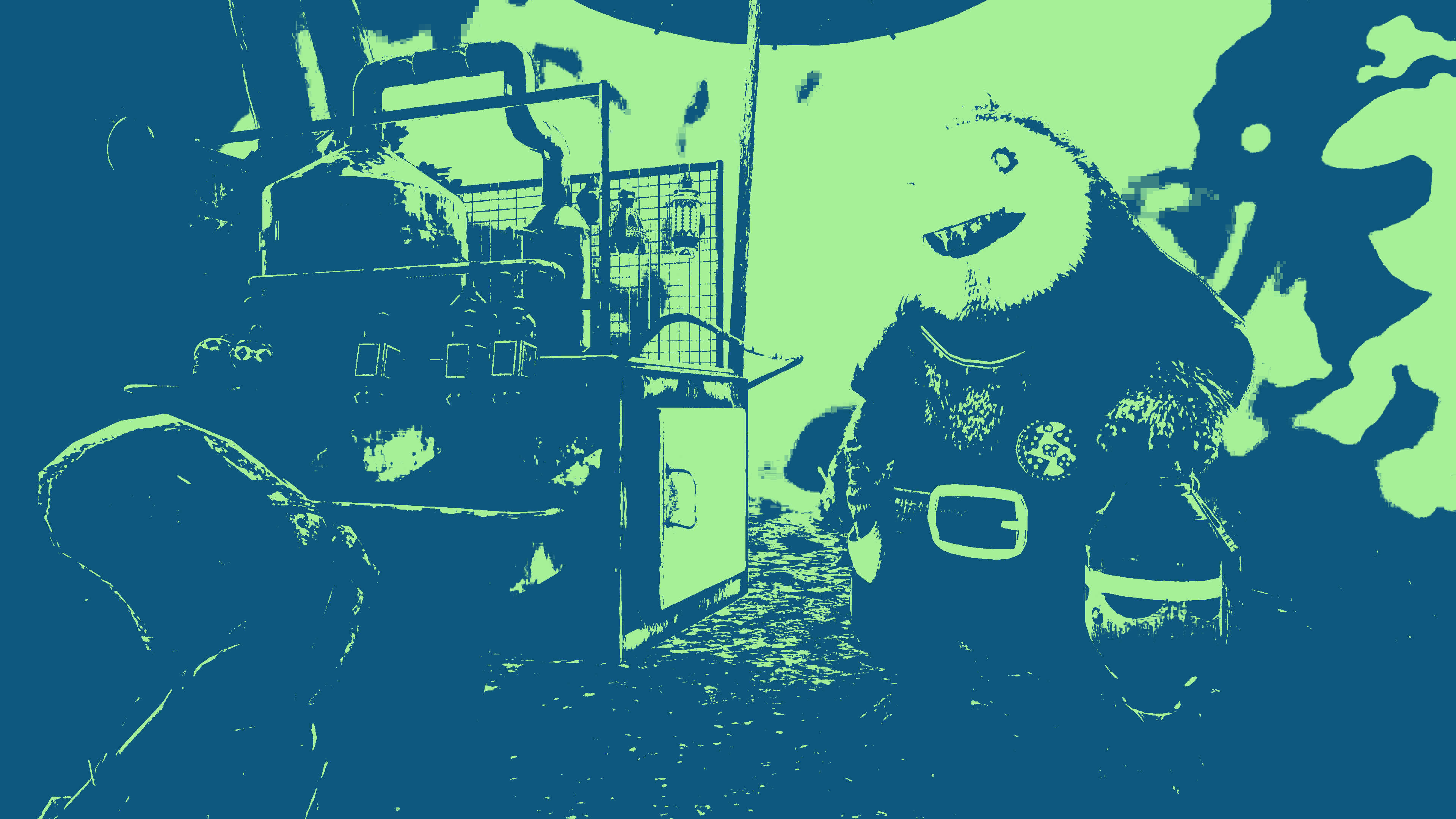 I.
I applaud everyone who finished Biomutant. It is a uniquely strange game, a difficult game, but not difficult in the way that we normally understand the term. It is, in the theoretical terms of Patrick Jagoda, affectively difficult. While playing, I experienced an absolutely bewildering number of feelings: confusion, delight, anger, boredom, frustration. None of these cohered into some kind of final aesthetic thought on my end, and the fragmented nature of this essay shows some of this. Biomutant is not something I could get my mind or my hands around, and I eventually gave up on it after several hours of near-distress at what was happening in front of my face. This mutant video game ....

History is foregrounded in Biomutant. You play as one of the inheritors of the earth after humanity has perished. You live in the ruins of that life and culture. You’re a mutated critter, some half life entity on the vanishing edges of apocalypse, but you live in a culture of total cultural collapse. All of human history in a moment: some of the creatures are samurai, some wear turbans, some do kung fu, some are divers, and on and on and on. Everything is happening all at once, mutated all together, and yet the game cannot help but beat us over the head with an environmentalist message. We learn that humans once drilled too deep and let oil seep onto the surface. We know that there are zones of the planet without oxygen. We know that mutation is because of humanity’s hubris. It’s an entire world cursed to know a whole hell of a lot all at once.

Infuriatingly, these god damn creatures of Biomutant have their own language that is the product of the worst excesses of post-apocalyptic literature. When a character in Fury Road alludes to “who killed the world” and refers to “aqua cola” instead of water, a viewer can think “damn, look, it’s clear we’ve lost some things.” When the critters of Biomutant pepper every sentence in a single conversation with made-up words like “googlide” (jetski) and Quacks (rubber duckies) and Sinkidink (skiff) and on and on, the whole thing begins to lose its effect. It turns into an endurance challenge. How long can you handle it? While I was going through some of this, my wife turned to me and asked what the hell this was that I was playing. I said I had no idea.

The above paragraph isn’t quite true. The creatures don’t really talk. They have their own language sublimated beneath human speech. There is a Narrator, a Slightly Playful English Voice, that stands between every character and the player. Reminiscent of Fable, this narrator summarizes everything being said by the biomutants and delivers it in a lilting, friendly tone. I think it is a singularly bad idea, a kind of historical aesthetic error, to again let the English capture the whole world and interpret it for the rest of us.

V.
Biomutant seems to be obsessed with mediation, with putting things between the player and the object of their desire. Every moral choice is greeted by a layer of discussion where a literal angel and devil appear to duke it out for supremacy. Area bosses require the player to interact with the local flora and fauna in order to find the right pathway to their defeat. That narrator is always getting in the way with his interpretations and summaries. The game seems almost fearful of letting a moment breath or letting the player try to understand the world on their own terms, constantly jamming in collectibles to find or areas to conquer or zones to loot. Dangerous areas require certain items to traverse. On and on, Biomutant seems to have mistaken content with contentedness, mediation with media itself. The things that get in the way are what we’re supposed to be happy with.

There was one moment, a few hours in, where I needed to navigate my critter up onto a plateau and take a long way around. I didn’t want to walk all that distance, and so I tried to glitch my way up and over a mountain. I almost had it. I made it extremely high, to the point where I could see the strange intersections between rocks and structures that I was never meant to look at, and at that point of near-triumph hit an invisible wall and fell all the way back down the mountain. I was elated that I was getting something from this machine, and then all that work went down the tubes. Metaphor, maybe.

There’s a spaceship in Biomutant that could, maybe, take your critter and some select allies away from here. Part of the moral decision of the game is deciding who gets to go. Whether you achieve the good ending or the bad one, apparently, you still get in that spaceship and fly off with a few of your closest friends. In the broad context of what we’re told about this world of constant mutation and brutalizing combat with melee weapons and guns, it almost feels like an elaborate trolley problem rumination: who gets hit by the train of biomutational History and who gets off the rock scot-free?

Biomutant’s world is created out of aggregate decisions. Corporations and their humans poisoned the planet and set the conditions for their inheritors to churn it apart. Then those humans disappeared. We play a singular critter who, with some friends, is able to strongarm the world into whatever shape they want to. It’s a deadlock, an impasse, about how world history functions. It took a plurality of people to biomutate the world but only one person to knock it back into shape? A thousand people mutate the planet but one mutant can crush aberration and reestablish the natural order? Nature hides behind this, and a belief that one can at least violently assert order even if you cannot go back. Bios, life; mutation, transformation. But into what, and for what cause?

Cameron Kunzelman is a critic. You can follow him on Twitter or listen to his game studies podcast. He is writing a book about speculation and video games.