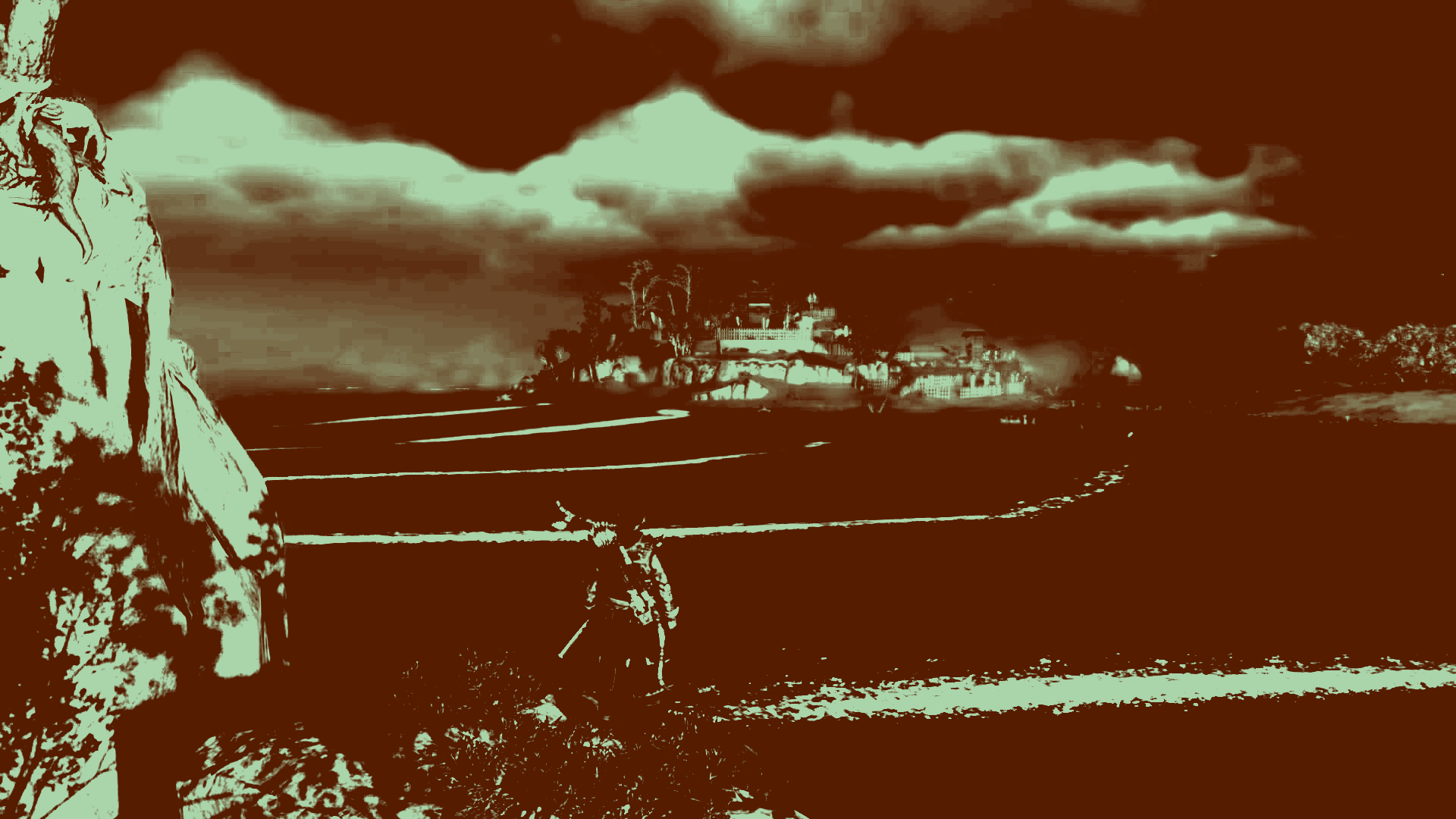 “. But while you were sharpening your sword, do you know how I prepared for today? I learned.”

The emotional heart of Ghost of Tsushima is the conflict between honor and dishonor, a conflict manifested within and between various characters in the game. Samurai (and eventually titular “Ghost”) protagonist Jin must come to terms with working alongside a thief, poisoning and beheading his enemies. His uncle, Lord Shimura must grapple with his perceived honor as a hegemonic middle manager with another hegemon to report to. But for the majority of the game, “dishonor” is personified by Tsushima's barbaric-coded main antagonist, the fictional leader of the game's Mongol invaders, Khotun Khan.

Khotun relishes what the samurai of Tsushima perceive as dishonorable tactics. He immolates the first foe he meets. He puts entire villages to the torch. He brutally kills as he sees fit. But Khotun is not the rabid mainlander the samurai believe he is. What he shows is something vastly different—a villainous, cultured Other. While Khotun’s body type, skin tone, and armor immediately cast him as Other, his actions contradict this. He speaks Japanese, has studied samurai tactics, and he understands the culture and psyche of the Japanese. Thus, he knows how hard to push on Japan’s societal bones before they will break, and which ones he can break while still successfully capturing the body.

The insistent, tell tale heart beating within colonialism is the death march of seeing something, desiring it, and taking it. As the invasion’s leader, Khotun’s ultimate goal is not to obliterate Tsushima, and, by extension, Japan, but to bring it fully within the Yuan Dynasty’s control. The invasion depicted in Ghost of Tsushima was predated by years of demands of vassalization. The Yuan Dynasty had seen other nations, desired them, and taken them. Japan was next in line.

Any of Khotun's perceived barbarism is a means to an end. Burning Lord Adachi in the opening minutes of the game causes Shimura to recklessly charge his forces against a foe he does not understand and does not wish to. Though Shimura commands Adachi to challenge the strongest Mongol in single combat to “break their spirits,” it is, instead, the inverse which happens. Adachi’s vicious defeat at Khotun’s hand breaks the spirits of the samurai warriors previously lined up alongside him.

In fact, this "spirit breaking" is a consistent part of Khotun’s plan. He invites Shimura to surrender and help him conquer Japan. When Shimura refuses, Khotun lords Jin’s increasingly disreputable actions over him to sow distrust toward his cherished protege. Later, Khotun successfully executes a double spirit break. He orders the traitorous ronin Ryuzo to burn a captive alive and Ryuzo immediately implores those within Castle Shimura to surrender, which they do upon seeing Ryuzo betray his people. Finally, when Khotun invites Taka, a simple blacksmith with newfound bravery, to kill Jin after their capture, he calculates one of two things will happen. Either Taka will kill Jin and Khotun’s “Ghost” problems are over or Khotun will punish Taka for his failure, further demoralizing Jin.

Like villains such as Star Wars’ Admiral Thrawn or Star Trek’s Khan Noonien Singh, Khotun uses a kind of calculated violence, both physical and psychological, as a tool. Like them, he believes that he is virtuous. He offers peace at knife point; it is not his fault if his foes do not accept this offer. This capacity to rationalize violence behind “good faith” helps to soften the corners of an otherwise brutal leader.

When possible, Khotun’s, Thrawn’s, or Khan’s threats of violence are displaced. Their lieutenants, or those whose spirits he has already broken, dirty their hands for him. He constantly offers leniency, and perhaps even lordship, through subjugation—an offer with basis in history. After decades of war between the Kingdom of Goryeo (the predecessor to modern-day Korea) and the Mongol Empire, peace was negotiated, allowing the Kingdom to keep its culture and its sovereignty but only as a vassal state to the Mongol Yuan Dynasty. Converting an enemy into a pawn is essential. Khotun is right: the Japanese more readily surrender to one of their own. By the end of the game, he’s even converted Jin into a fifth column. Japan may have fended off an invasion but it is now divided against itself.

This kind of administrative behavior is another example of what elevates the particular kind of villainy that Khotun represents. While Shimura de facto delegates the dirty work to Jin, Khotun regularly overtly does so. In this, like Thrawn, Khotun represents an “evil empire” turning the work of subjugation and conquest into an act of administration. A subjugated people need an effective system to keep them in line. Khotun aims to provide that system, employing Japanese people to enforce his hegemony whenever possible.

What avenue, then, do you take to defeat an enemy that speaks your language, knows your tactics, and has studied your culture? You do the same. You learn his tactics, study his people’s artifacts, and take the fight directly back to him.

In this way, Khotun is reminiscent of another cultured outsider with a barbaric streak, Hannibal Lecter. While Khotun is not a respected member of the Baltimore elite, or a cannibal, they share one major commonality: to beat them is to join them. Lecter invites his foes to delve into the minds of those they hunt. To find the Chesapeake Ripper, FBI profiler Will Graham had to get inside Lecter’s head, learn his tactics, and wield them. To defeat Khotun Khan, Jin Sakai had to do the same. Like Lecter, Khotun demands that his pursuers embody the same kind of lateral thinking that he brings to the battlefield. Lecter warps and distorts his enemies. He assaults them psychologically, even while captive, to force them to see the world as he does. Khotun, too, provides a kind of mentorship to Jin, bending him from the front facing, honorable samurai to the asymmetric warfare expert of the Ghost.

As Jin traverses Tsushima, he finds Mongol artifacts and learns Mongol tactics. As he fights the leaders of enemy encampments, he studies their weapons and strategies in order to become a better swordsman. As Khotun uses gunpowder-based weaponry, so, too, does Jin. As Khotun knows when to land body blows and when to lop off a head, so, too, does Jin. Success against the cultured, studious outsider figure represented by Khotun Khan requires that one must also become a cultured, studious, outsider figure to their own people. However, success does not mean disarmament or negotiation, it means slitting throats.

Notably, unlike Lecter, Thrawn, or Noonien Singh, Khotun is not permitted to look the part of the suave, cultured Other. In no scene is he ever permitted to wear the fancy dress of Lecter or the pristine military uniforms of Thrawn or Noonien Singh. Instead he is shown to be opposingly bulky with an even bulkier set of armor and a massive weapon. Though he speaks in an almost prose poetry style, he is always shown to be dressed seconds away from riding into battle. He waxes philosophical while physically dominating each scene.

It is fitting, then, that Khotun often only draws a weapon after he has wielded a chalice. He acts as an inverted diplomat—a scholar with no fear of drawing blood once his attempts at peace are satisfied. He brandishes a symbol of plenty against his enemies while offering them riches in return for their fealty. When Jin escalates the war and attempts to use Khotun and his people’s propensity for beverage against them, Khotun discards his cup and meets Jin’s escalation with an escalation of his own.

This archetype exists because it presents a particularly heightened threat to the ordered hegemony of our lives. It is easy to stoke nationalistic fervor around a barbarian. But there is an elevated level of danger to an opponent specifically interested in countering your tactics. Khotun represents a weapon forged not with a task, but with an enemy in mind. He is an embodied, corrupted tool. Learning the language, culture, and beliefs of our enemies is meant to draw us closer such that we can understand them better, and avoid war. Frighteningly, it is also those with the strongest grasp of those areas who are best positioned to unmake us.

The danger that Khotun Khan embodies is more than the overt threat of annihilation. He represents a subtler threat that is both internal and external. He reminds us that to know an enemy is to defeat that enemy. He reminds us that our allies and our methods may be turned against us. He erodes the foundation of our home such that it must stand against the storm he represents and against itself as it threatens collapse. But most frightening of all, the danger he embodies comes with the caveat that the solution is simple: join or die.

David Shimomura is a writer based out of Chicago. His critical interests include deconstructionism, narrative and storytelling, dogs and horror. Follow him on Twitter @UnwinnableDavid.