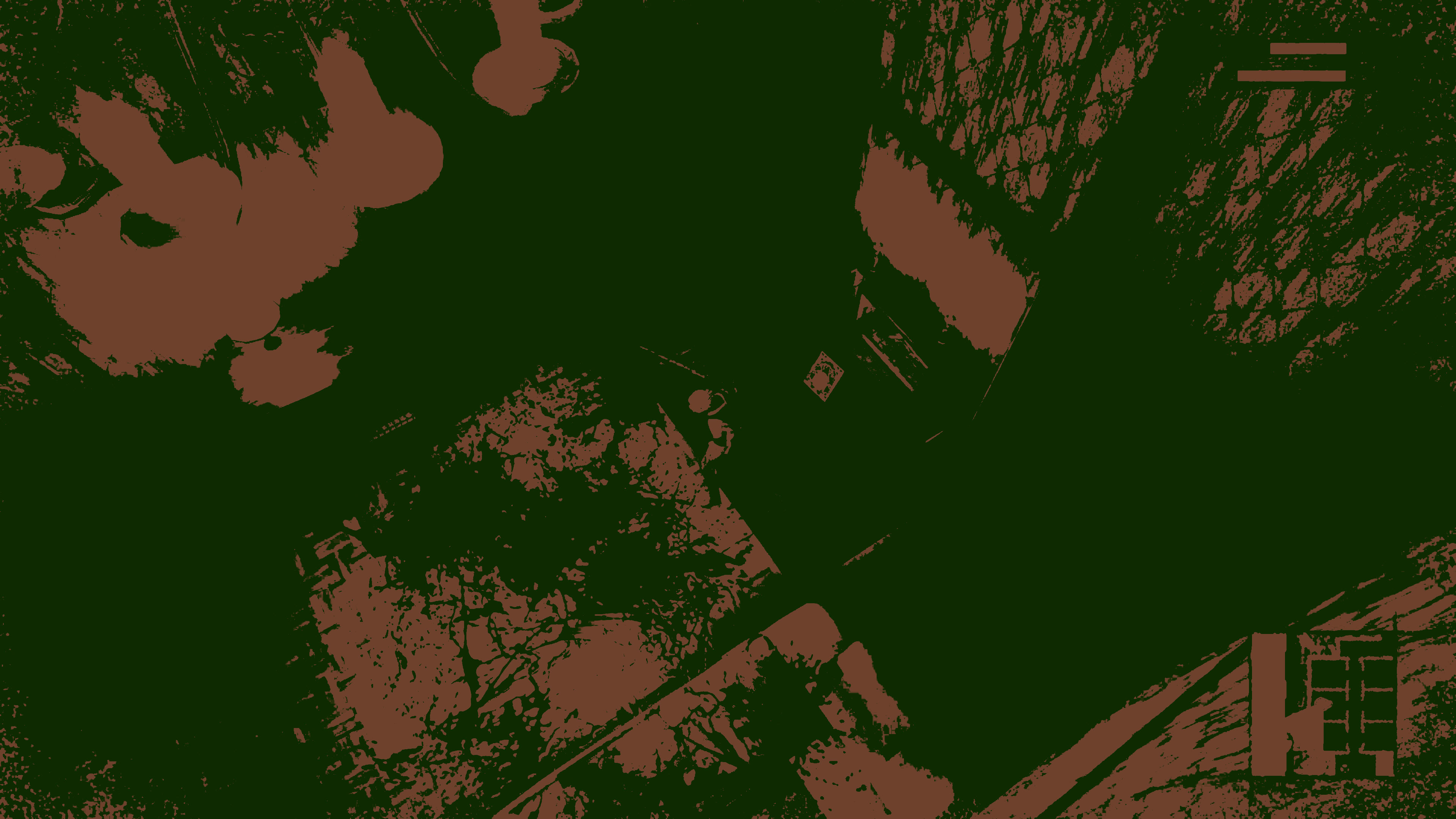 This World and Everybody In It
Reid McCarter

You look at: rough grey-blue skies the colour of choppy seas and rich green fields dotted with sheep baa-ing for their meat to explode out of them, another twinkling yellow star to put in your pocket. A guitar picks gentle metal notes over the palm-padding of soft drums, warm hands on stretched hide. Words are poison, but you collect them to turn their danger into malignant veins of cancer-black and blood red—spears to pierce the bodies of frantic ghost children capering like agitated monkeys in mountain meadows.

The world is long since dead.

Women’s voices sing a looping liturgy for it. But your little sister is still alive, just hanging on as arcane sentences wrap themselves around her small body, strangling what’s left of the goodness she brings to the clockwork void.

Killing feels good and makes you stronger. A book with a sneering cartoon villain accent mocks the notion of purpose, but, as established, words are poison, so books are not to be trusted, no matter what they say.

Everyone’s lost someone—a man’s dog crumpled dead with medicinal leaves in its mouth; two sons whose mother’s corpse lies abandoned in the arms of a man they never really knew; electric phantasms twisted in grief over their very existence—but their loss is different from yours because it is theirs. You never felt it the way they did. And yet, again, the land itself is in mourning for a vitality that vanished centuries past. The good times have left, though the worst is yet to come.

A hell of survival. Friendly conversations with robots. A team of people in a different nation look at a country and see the atomic Ahab heart of its war machine aimed at global apocalypse—from hell’s heart stabbing at all of us for pinpricking its pride; for hate’s sake spitting its last breath at us.

How tragic and inevitable that all coffins and hearses sink to the common pool. They go back to lands that never existed, lighting candles to warm a stone house and hiding the red eyes of living ghosts behind stiff wooden masks.

A fake Europe; a sand-whipped Petra and sun-bleached Greek beehive; a videogame mansion drained of colour and haunted by the spectres of a lonely, moon-faced boy and all of those who have left him behind. Great plains and ruined libraries. The works of humanity and the wet-leaved, stony-lipped faces of the gods that hate those works.

A selection of pages:

-          Two libraries, shelves upon shelves stacked atop one another.

-          Dreaming paragraphs in the void, inverted lines of white on black that structure the nothingness forever.

To the last, an implied sexlessness (frozen semen samples; musty workstations piled with crusted references) never fulfilled. Thin underwear and childish smirks, a teenaged king and his faceless bride, a skeleton forever poised, like the universe he’s been created to inhabit, on the brink of the one ratifying orgasm that will quiet his mind. The anger bubbles as pubescent frustration, the diorama stage and the hands that crafted it unable to express the roiling want that animates their presence. Virginal and world-weary.

Looping again in and in on itself. You fall down in a controlled roll. Landscapes appear and vanish. Venetian canals of dry dirt running fallow through the same wolf-corpse tragedies.

The same answers to the same riddles.

Your sister walks past, stumbles—there’s never an embrace because the blood that moves through this reality is meant only for spilling like red paint on a precise blueprint.

Words are poison, so don’t articulate them. Sit with the atomic blast that turns a boy into a tiny blue globe, the entirety of life in his plea not to die alone.

Repetitions and eventually a hollow nirvana. “I’m tired of this world and everybody in it,” she says. And then she continues onward. There’s nothing poisonous in that, but you’re finished anyway.

Reid McCarter is a writer and a co-editor of Bullet Points Monthly. His work has appeared at The AV Club, GQ, Kill Screen, Playboy, The Washington Post, Paste, and VICE. He is also co-editor of SHOOTER and Okay, Hero, co-hosts the Bullet Points podcast, and tweets @reidmccarter.